For Peter Mann, it was an impossibility to find some sleep. Only a few minutes of dozing off were granted to him. For one thing, his position was more than uncomfortable. He had his hands behind his back in handcuffs and his feet chained to his bed.

Especially on his hands, the metal pressed painfully into his wrists as soon as he tried to lie on his back.

Whenever he fell asleep for a short time, something started to hurt, so he woke up immediately and found himself in the absolute darkness of his cell. Most of the time he would then start to twitch in shock and was immediately reminded of his unyielding shackles.

His only clue was the red light of the surveillance camera above him.

But not only did the shackles make restful sleep impossible. It was also the wet panties he still had in his mouth. Slowly his jaw began to hurt and his tongue also became irritated and increasingly dry.

When it was early morning, he was overcome by a deep sleep, which the body took for itself from exhaustion – ignoring the pain in his hands, feet, and privates.

But Peter Mann woke up immediately when he heard the sound of heels and female voices approaching. He realized in horror that the panties were no longer in his mouth. He must have spit them out during his deep sleep phase.

A moment of inattention

Hectically he began to grope for them with his mouth on the bed but he could not find them. They had probably fallen from the edge of the bed, so that they were out of reach for him. Had he not been tied to the bed by his feet, he might have had a chance.

But it was too late without them. The cell lighting was switched on and at the same time the door opened. Peter was almost blinded by the light.

He saw that two guards were standing in the doorway and were looking at him with a pleasurable look. Both were again at least 1.80m tall, slim, and wrapped in tight leather clothing. Both were certainly not older than 25, but handsomely well aware of their effect on the prisoner.

“Oh oh! What sign of disrespect do I see? You are given the honor of looking after such precious panties for one night and you carelessly throw them on the floor. This is starting well, I see we have to shift into a harder gear from the beginning with such a little lawyer pig.

With these words, both guards entered the cell. One of them picked up the panties from the floor and pulled them over his head, dangling them around his neck. Then she reached under her short leather skirt and took off her own Tangier, which she stuffed back into Peter’s mouth, of course. Then she took a gag from the wall and put it on Peter Mann, who got scared for a moment and said “Mmmmmhhmm”. But the gag was put on with practiced speed so the panties could not leave their destination this time.

“That’s better. Under my supervision, I will not tolerate such disrespectful behavior toward me. Nothing will be dropped here this time. In addition, 25 points will be added to your penalty account for the spitting off of your panties tonight. You will get to know your penalty account this evening when you are allowed to work off the points you received during the day on the penalty box.

And now enough rest, a long day is waiting for you!“

With these words, they released his ankle-cuff from the end of the bed. A leash was taken off the wall and reattached to his chastity cage. Afterward, the usual procedure of a sharp pull followed so that Peter Mann had to get up and immediately run.

After he still hadn’t been given anything to eat or drink, his circulation was slightly overwhelmed by the abrupt rise. Everything almost went black before his eyes.

Only the incessant pulling at his privates kept him on his toes. He walked again along the long corridor. Peter wondered if he was the only prisoner here, after all, he couldn’t see anyone else.

He did not know at that time that the prisoners are always strictly separated so that they get a maximum feeling of helplessness. Only during punishments could the prisoners see each other. Which, of course, should also have a psychological effect. In Irongate nothing was left to chance.

The entire prison was designed to inflict maximum torment on the inmates without leaving any permanent damage. No physical damage at least. Of course, the prisoner should be psychologically broken as soon as possible.

Peter Mann was led into a large room which was already full of female guards. Again, he was ordered to stop on a marker on the floor. Surrounded by his torturers, the first phase of his initiation ritual began.

Each prisoner in Irongate was given a heavy neck iron, which weighed about 2 kilograms. On the one hand, it served to fix the prisoners as the guards wished because it had 4 metal eyelets on each side.

Moreover, the heavy metal iron was torture for the prisoner, to which he only got used to after a month. This helped to nip any thoughts of escape in the bud, especially in the beginning, because the prisoner had enough of a struggle with the heavy iron, which kept him from having any stupid ideas.

After the heavy iron around Peter Mann’s neck was fastened, he had to walk to a metal bar that protruded about 1.5m from the ground.

He quickly understood that he had to bend his upper body forward so that the neck iron could be attached to the bar. Now his legs and upper body formed a 90-degree angle. In this rather uncomfortable position, the next part of his ritual began.

A very tall female guard with a height of over 185cm approached him holding a document in her hands.

“You will now be read the Irongate Rules. From this point on your grace period is over. You know all the rules and will be punished accordingly in case of misconduct. The rules will only be read to you once. Each time you break a rule, it will be explained to you again after you have been punished accordingly. With this pedagogy style we have achieved very good results so far, so take good care of your slave.”

The following rules must be observed:

After the guard had read all the rules, she put the list aside. Peter Mann did not really believe what he had just heard. He didn’t think that his situation could seemingly get worse than it already was.

Slowly, panic spread in him again. How could he survive the next weeks, months, or even years? How was he going to survive the next minutes, when his position was more than uncomfortable? His wrists on his back were already hurting badly because they were pulled backward by the chain leading to his ankle cuffs.

His neck also began to hurt, since he was firmly fixed in the neck iron. But he did not have long to think about these things. The guard, who had just read out the rules, approached him again and said:

“You have one of the few opportunities to say something now. So, pay attention! I’m going to ask you just once: What’s going to happen to you here next?”

Peter Mann was totally surprised by this question and did not really have an answer. How could he know this? He shook his head slightly and tried to shrug in his position. He couldn’t say anything anyway because he was still gagged with the panties in his mouth.

“Ha ha, I thought so. Your only task was to listen carefully to the rules. If you had followed them, you would know that your 25 lashes for this morning are coming now. You must learn to obey early. That’s why we’ll make it 30 lashes and you’ll get your first penalty point for Sunday.“

With these words, she walked to the wall and took a thin riding crop from it.

Peter Mann somehow tried to protest or to make himself quite finished, but all he could hear was the sharp hissing of the crop. What came then cannot be put into words.

A biting, stabbing pain went through his whole body. Instinctively the flight reflex was triggered in him. He tried to escape the situation, but the iron around his neck, hands, and feet did not give way one millimeter. It only cut deeper into his flesh and caused additional pain.

So, he kept still, when he heard again the ominous hissing of the crop… 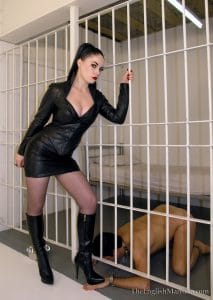