There is a thin line that separates a Woman from her slave. Sometimes, as in close encounters, a line is so thin one could find it hard to recognize. Yet, it is always there. It separates two worlds, worlds that could never come together. Like a horizon that separates the earth from the skies, it separates those who walk in the skies from those who crawl in the dirt.

She is beautiful, she is powerful. She is clever, whimsical and opinionated. She is cherished and adored. She is art, she is science, she is music. She is everything.

He is crushed and abased. He is powerless. Utterly subdued, humiliated and used to live underneath a woman’s boot. He knows no art, no science, no pleasure. He does not think, he obeys. He is toil, indignity and suffering. He is nothing.

The proximity of a Woman and a slave would only serve to enhance their differences.

She gracefully strolled out of her palace, where she enjoyed a pleasant lunch with her friends. She ordered her riding gear prepared on a whim, causing a bit of a noise in the palace courtyard. Slaves rushed to the stables to prepare her favorite black stallion for an afternoon ride. Speed was everything. Their lady was not used to waiting.

He also acted on a whim. Not on his whim, but on a whim of his mistress. There was no lunch that would distract him from his dull task of hand scrubbing the vast palace courtyard on his hand and knees, for slaves received only two meals a day. A tasteless slave gruel in the morning and in the evening, which gave them just enough strength to survive through a day of toil.

There She was, walking nonchalantly against him, arrogantly playing with her riding crop. Her tight red riding jacket enhanced her slender figure as she walked past the kowtowing slaves. Suddenly, a solemn silence lay upon the courtyard. There were only birds singing and Her footsteps to be heard. The slaves pressed their faces against the dust, terrified, as the living Goddess walked above them.

He slowly raised from his kowtowing position on his all fours, assuming the position of a stepping stool, his eyes still staring on the ground. She held the reins of her stallion and stepped on her slave’s back as if he was a mere piece of furniture. She showed him no mercy of quickly jumping on her horse, but she remained standing on his aching back for quite some time.

Her fair complexion was in sharp contrast with his bruised and sunburned, almost leather-like skin. Her expensive clothes were speaking of wealth and privilege, while his loincloth, heavy collar and shackles spoke of nothing but of oppression and subservience.

They had nothing in common, expect from the obvious fact they were both biological homo sapiens. A fact most Women cheerfully ignored, labeling slaves as “subhuman”, “beasts” or even “things”. They represented two different worlds, yet for these few brief moments of close contact they represented two parts of the same entirety. A ying and yang. Positive and negative infinity. Separated by the thin line, where her riding boot arrogantly pressed on his sore back. 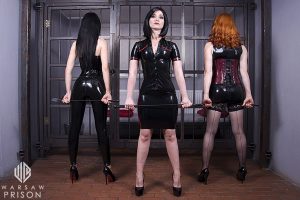