“At least he’s on time. That saves me some stress, and him, his first punishment. Both good, and a pity at the same time, but there will be enough opportunities to punish him. That’s what he’s here for, after all.” – she thought to herself.

Luna was a young art student, a pretty, enlightened, and emancipated woman. She had a strong sense of justice and little love for old-fashioned thinking. She would never submit to a man, and she would never stop fighting against patriarchal structures for a better world.

But this afternoon was not about revolution or a better world, it was simply about work. She had to complete a term paper for her studies, which she wanted to get over with, along with her best friend and fellow student Lena today.

The topic was: “Freehand drawing of living objects”. She didn’t have to think long about which “living object” would lend itself to this. It had to be flexible, do everything she asked, and be able to hold still for a long time.

“So, if not for that, then for what do I have a devoted husband and suitor?” – she thought with an already rising anticipation.

And so, she ordered the ignorant object to come to her this afternoon at 2 pm. The object was called Christian and was, in fact, her devoted fan who deeply adored and admired her. He was a good deal older than her, already full in life, and enjoyed every second which he was allowed to spend near her.

He had already endured a lot to come into the favor of her because he was, of course, one of many who vied for her attention.

So, he had not thought long today about whether he would have time, and so he stood precisely at 2 o’clock before her door and asked for admission.

After they had greeted each other briefly and made a little small talk, she interrupted him and just said, “Come on, we have to get started. There is still a lot to do!”

They went to her bedroom, and she ordered him to undress completely and put on the chastity belt she had prepared while she disappeared into her storage room.

The KG always had to be put on by him before she did anything with him. After all, it was not about his pleasure, she also had no desire to constantly look at his hard cock, which would only disturb her. He was also clearly more handsome and less cocky when closed up.

When she returned with a small box, he was already completely naked and locked. He was always a little ashamed when he stood in front of her, and the power imbalance was clearly felt. After all, he was an otherwise successful man who did not submit to anyone, but this young beauty managed to undress and subdue him with one word.

She enjoyed his bright red face and aggravated the shame with a short: “On your knees”.

He immediately did as ordered and tried to hide the humiliation on his face, which, of course, was not possible because she knew him far too well.

“I want to try something with you today. I think you’ve been a bit cheeky and forward lately, and I also have the feeling that you sometimes want to get your own way. But I’ve told you before that the perfect man behaves like a good doggie towards me, and that’s exactly what I’m going to teach you today… among other things.”

With these words, she opened the box she had brought with her and took out several latex parts which he could not identify. In any case, he had not seen them before. But suddenly he realized that it must be the online order which he had to pay for with his credit card last week.

There were four parts, two of them looked like long gloves and the other two parts reminded him of pantyhose – all made of latex.

He had to put on the two leg pieces, which also had a strap and some kind of padding on the knee. After both were put on and closed with a zipper, he had to bend forward so that he was on all fours.

Then Luna stepped behind him and alternately took each of his shins and folded them up so that his ankles touched his buttocks. Then she fixed the position with the attached leather straps.

Immediately it drove the sweat on his forehead because he slowly had an idea where the whole thing would lead and he was not quite comfortable. It would mean complete helplessness for him.

Luna sensed the rising fear in her toy and therefore wanted to finish the first stage of transformation as soon as possible, not that he would resist otherwise – even if this would have consequences, of course.

She helped him put on the gloves (which reached up to his shoulders) because he already had slight problems balancing on his knees. The gloves also had a leather strap, as well as a pad on the outside of the elbows.

She ordered Christian to prop himself up on his elbows and guided his forearms upwards so that his hands touched his shoulders. Again, this position was fixed with the leather straps and now the trap had completely snapped shut. Now there was no escape for her little dog.

He looked at her anxiously, his fate was now completely in her hands. She couldn’t help smiling smugly and remained kneeling next to him. She stroked his back and patted his head.

“Such a sweet doggy you will become, you will be proud of yourself.” – and so she kissed his blushing cheek.

He had great difficulty adjusting to the new restrictive position, and he swayed slightly back and forth. Likewise, his KG was now swinging under his belly. He was aroused to the extreme, but the little prison did not give an inch.

“Because I can imagine that you will have a lot to complain about in the next few hours, and I have no desire to make myself right or to discuss, you will now open your mouth nicely.” – she whispered in his ear and fetched a ball gag from the box.

“But I mhmhmmmhm” – he still tried to say. With long-practiced skill, she had inserted the gag at the first opening of his mouth and closed it tightly.

“Good doggies don’t contradict their mistress.” – she admonished him with a raised forefinger. “In general, doggies have nothing to say.”

“Oh dear, now she has robbed me of the last means of resistance. Now I can’t even protest. I hope I can stand all of this.” – He shuddered.

“Besides, doggies don’t have gags in their mouths, what would people think? You still have to consider that.” – she scoffed.

With these words, she took a leather dog mask from the box and put it on him. Completely trapped under the mask, his field of vision was also severely restricted. He could only look straight ahead through two small holes.

Again, she stroked him and bent the ears attached to the mask to her liking.

Now, thanks to the mask, you really couldn’t see that he was wearing a gag underneath, because that was exactly her plan for later.

“Such a cute puppy you are, oh if only you were always such a cutie.” – and with these words she patted his bottom and briefly took the KG in hand, immediately noticing how much his best piece was fighting against the prison.

“Good doggies don’t run around with an erection, remember that. But if you absolutely want to wag your tail, you shall have the opportunity to do so.”

Again, she reached into the box and took out a curved piece of plastic. The bizarre dog could no longer see this because his field of vision was already too limited by the mask. But it didn’t matter, he was not in the position to decide anything anyway.

Luna rubbed a bit of lube on the end with the plug and then inserted the cock without warning.

Christian flinched and instinctively tried to escape, but he was far too awkward in his new outfit to seriously get away. He felt something cold enter his anus and stay there. He tried to shake it off but was unsuccessful.

“Haha, oh now you’re already trying to wag it sweetly, how cute. But you also just tried to resist, of course, this can’t stay that way. Misbehavior must be punished.”

She fetched a small crop and hit him twice on each buttock.

“Mmmmsdmfpsfpfpsdfjsdmfsdfm” – came from the mask. Christian was as if hypnotized.

It was almost black before his eyes as he fought against the incoming stimuli. He no longer knew what he should concentrate on and was afraid for a short time to lose his mind from pleasure, pain, humiliation, fear, and slight despair.

He also felt anger boiling up in him. That witch, who does she think she is! How dare she deal with me in such a humiliating way. But then he had to admit to himself that anger would not help him in the current situation. He had to pull himself together now and be good, so he could get through the next few hours.

Of course, his world of thoughts did not remain hidden from her again, he had already fallen for her too much and couldn’t have deceived her.

“Oh oh, I see you are just a very young puppy who is still wobbly on your feet. It’s time to put you on a proper leash.” – and so she took a collar out of the box, put it around his neck, and attached a leash to it.

“So now you’re done, we’re good on time. Let’s see how well you can walk at heel.”

She pulled on the leash and asked him to follow her. Of course, he stumbled and swayed in front of her and tried everything to keep up.

“Young doggies just need a little more help to know what is required of them.” – and with these words, there were a few more blows with the crop on his butt.

Again, on the verge of a blackout, he redoubled his efforts and began to keep up with her. They walked up and down the apartment hallway again and again, until suddenly the doorbell rang.

“Oh, that’s Lena, we are going to start our homework now!”

Now he was about to go mad. No one had told him that someone else would come along, and certainly not Lena – Luna’s best friend. He was beside himself because after all, Luna should know very well that he didn’t like it when others found out about his submissive side.

What a humiliation to be shown up like that, and for it also to be someone he knew. He was boiling with rage! But then he saw himself in the hall mirror. What a pathetic figure. He had become Luna’s puppy and he briefly had the feeling of exploding with lust.

Part 2 follows if you’ve enjoyed it so far. 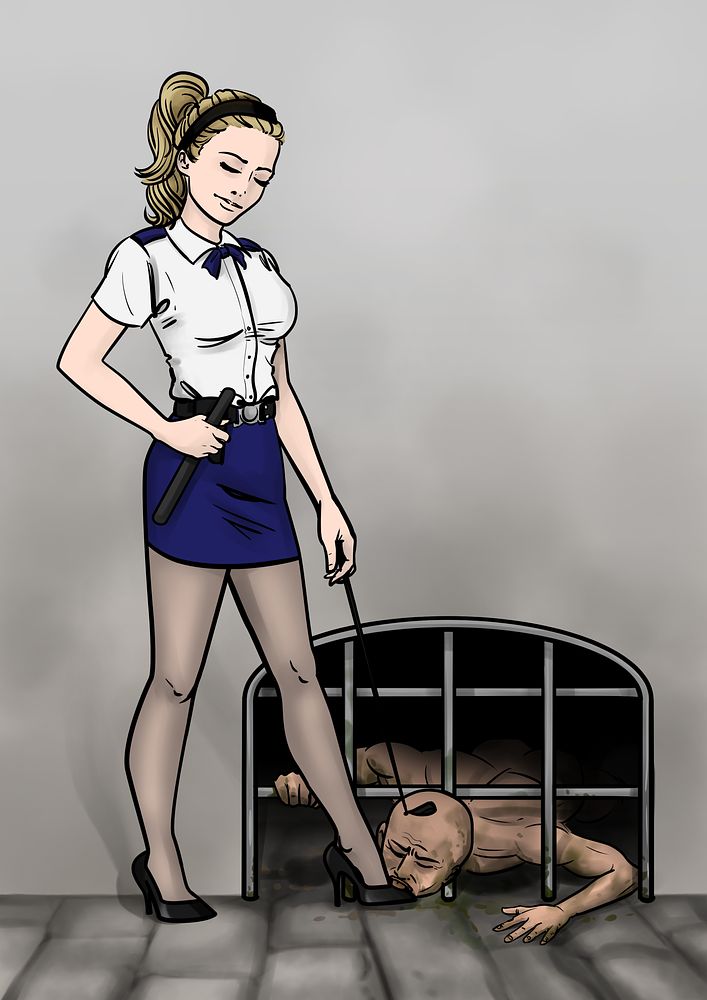 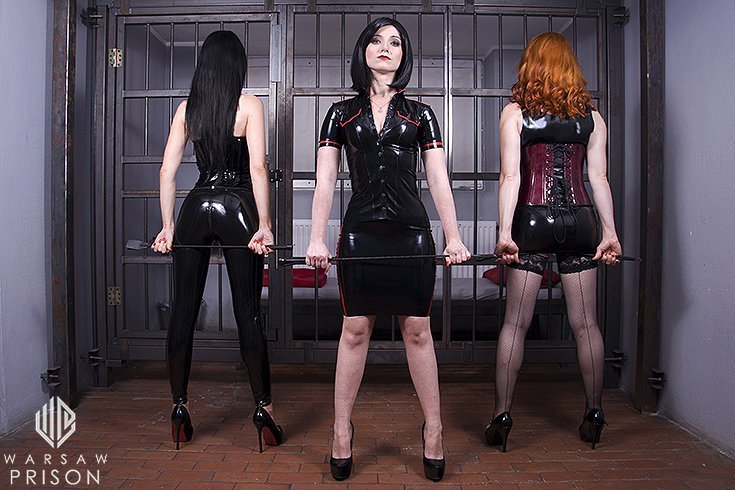